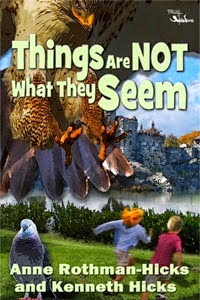 Jenny and her brother, James become acquainted with a pigeon who suddenly spoke to Jenny and they become embroiled in trying to help him escape this curse which turned him from man to pigeon one hundred and eighty years ago.
They get into all sorts of trouble and accidentally drag their friends Sleepy and Kaytlyn into the whole mess which turns dangerous with the death of their homeless friend, Mr. Bags.
Arthur, the pigeon, needs to get a certain document to help him undo the spell he put himself under and he is convinced that Jenny and James are the ones to help him.  Jennny keeps having visions of Semprus, the man who created the spell that tell her to remember that things aren’t always what they seem and everything happens for a reason.
The quest ends in a frightening climax and the children are left to wonder if this really has ended.

The kids were written very well in this story.  They were smart and enterprising.  They were caught up in this magical mess and they used all their strengths to work their way through it.  Jenny was introduced as a good student and an intelligent girl so her understanding of Latin seemed believable.
James was no dummy either.  He spent most of the book convincing people that he was a ventriloquist when the talking pigeon got out of hand which frankly happened frequently.  Some of their interactions made me laugh out loud.
Their friends found their own hidden strengths too.  Sleepy found his inner courage and Kaytlyn found out she was more than a pretty rich girl.  I liked the dynamic between the four of them.I never thought I’d come to like a pigeon quite so much but I did indeed.  Arthur was funny and spirited and a little sneaky because who likes a perfect pigeon, right?
The authors spun quite a tale but at no time did they talk down to children or have their characters behave rudely or crudely.  They were pretty believable kids telling an outrageous story to the reader which they made seem possible.


I really liked this story and I think kids in the 8 to 12 year age group would find the story engaging and the characters likeable.
Posted by Unknown at 4:00 AM