Spirits of the Pirate House by Paul Ferrante 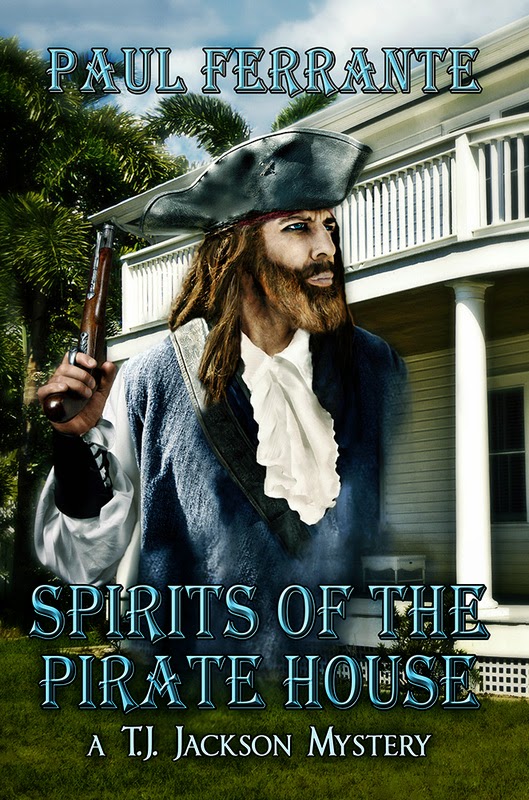 My three favorite teenage sleuths are at it again in Paul Ferrante’s book, Spirits of the Pirate House.  TJ, Bortnicker and Louanne team up as junior ghost hunters for the Adventure channel to learn more about Hibiscus House and why no one will work there any more.
They head to but not until TJ and Bortnicker are trained scuba divers.
is a beautiful island, known for its friendly residents but the teens and their pal from the ghost buster show, Mike Weinstein, are rebuffed when they ask about the house and its famous owner, Sir William Tarver.  Even their Beatles-loving driver, Chappy, is closed mouthed when it comes to that subject.
The head of the society that called the Adventure Channel in is the least enthusiastic to say the least.  She would do anything to stop the investigation.
A sunken pirate’s boat reveals something that promises to make the adventure even more thrilling but will they get a chance to use what they found?
In the meantime, TJ and his adoptive cousin, Louanne get closer to one another and a romance begins to bloom between the two.  Bortnicker meets Ronnie, the divemaster’s daughter, who seems to take a shine to him right away.  It looks like Bortnicker is in for a little romance of his own.
Once again, Ferrante shows his expertise on the subject of diving and itself.  The story is full of details that educate as well as entertain the reader.
I was happy to see Bortnicker come into his own and I was delighted that even TJ’s dad and Mike  get to have a little romance on this beautiful island too.
The teens have matured and are even more interesting than they were in the first book I read.
The only thing that bothered me was that the ghost who started out as a dastardly sort did a 180 when the teens confront him for the last time and kindly explains his whole story.  I wish there could have been some little changes before that so we knew Tarver wasn’t all bad.  Maybe he just needed someone who was willing to listen.


If ghost hunting is for you, then pick up this book.  I think you’ll really like it.
Posted by Unknown at 4:00 AM