Happily Never After by Missy Fleming 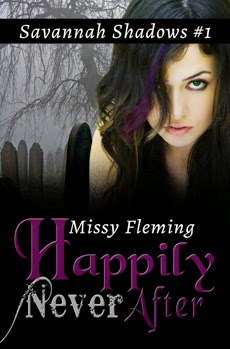 is an old town full of ghosts and nobody knows that better than Quinn Roberts.  She is an orphan who is left to live with her stepmother and her two stepstisters.  Any and all comparisons to Cinderella are encouraged in this story.
Quinn is hypersensitive to spirits who all seem rather benign and mean no harm until she suspects her stepmother is possessed by an evil spirit.
Quinn has always been treated badly by but things are escalating out of control.
Things are not all bad for Quinn however.  She has a true and good friend in Abby, whose home has been a refuge and where Quinn is treated like a loved one.  She also develops a relationship with Jason Preston, a movie star who is in for a shoot.
She tries to hold him off with a cool attitude but Jason is persistent and before long, Quinn gives into her feelings for him.
Quinn realizes she needs to deal with the evil spirit and protect her home which is her legacy so she decides to take matters into her own hands and confront the spirit who turns out to be an ancestor who has a vendetta against the Roberts family.

Quinn was a good heroine.  She had few fears and entered into dangerous situations with determination.  She also had her vulnerable side which her stepsisters took advantage of by spreading vicious gossip about her and Abby in school.  When Quinn had questions, she went to get help from the appropriate sources and showed good sense.  I liked her relationship with George, the little ghost who lived in the attic of her home.
Her best friend, Abby was a great girl.  She was honest and brave and supportive.  I hope as the series continues we get to know her better.
Jason was the anti-Hollywood stereotype.  He was interested in Quinn from the beginning and also was curious about spirits due to the death of his brother.  He had no ego problems and was genuinely interested in finding out more about Quinn and the spirits around her.  He was a prince of a guy because he even had the proverbial ball where Quinn in disguise was his date.

I don’t usually like stories about ghosts but I have to say, I really got interested in this group of teens and their adventure.  I’m looking forward to reading more of this series and I hope it continues to be so entertaining. I would definitely recommend you read this book if you are a fan of ghosts or not.
You can buy the book here:  Fire and Ice YA